The San Diego Law Enforcement Emerald Society Pipes & Drums has established a Dress Uniform to be worn at memorials, community events and other times designated by the Band.  The Band was very deliberate in the selection of our the particular items that make up the Dress Uniform. We wanted to be respectful of the heritage of our Celtic ancestors and honor those that have preceded us in the Law Enforcement profession. 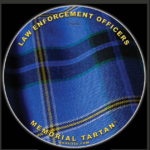 OFFICIAL TARTAN
We selected the Law Enforcement Officers Memorial Tartan, exclusively manufactured by USAKilts.com. The symbolism of the tartan design honors our chosen profession and pays tribute to our ancestral roots.
Description from USAKilts.com:

- The blue represents the living men and women who currently serve or are retired from Law Enforcement.
- The 2 thick black bars represent the men and women who have lost their lives in the line of duty. They also represent the 2 buildings of the World Trade Center (each bar is a tower) and the officers who died there. The 2 black bars contain 36 black threads each, for a total of seventy-two, the number of law enforcement officers who died on 9.11.2001.
- The dark blue line between the 2 black bars is there to represent the "thin blue line" which is a colloquial term for police officers. It means that Law Enforcement officers are all that stand between citizens and criminals.
- The gold and silver stripes represent the badges that officers wear.
- The spot where the black stripes cross the silver and gold represents the mourning band that officers wear over their badges when a brother officer dies in the line of duty.
- The green stripe is to honor The Police Emerald Societies and the Irish-Americans who made such a large contribution to police work in the early years in the US when few people wanted to do the job.

UNIFORM SHIRT
The San Diego Law Enforcement Emerald Society boasts members from numerous local, state and federal law enforcement angencies operating in San Diego County. Nearly all of the municipal, tribal and school agencies in San Diego wear the quintessential long-sleeve navy blue shirt. The band selected this shirt to show our kinship to our other "brothers in blue".
No rank insignia is worn on the uniform shirt.

UNIFORM PATCH
Band members wear the SDLEES Pipes & Drums uniform patch on the right sleeve. Rather than wear the standard SDLEES patch design, the band chose to create its own design which incorporated elements of the SDLEES patch yet made it unique and special to those that put in the time and effort to be part of the Pipes & Drums.
The patch identifying the band members law enforcement agency is worn on the left sleeve of the uniform shirt.

HAT PIN
The hat pin was designed to pay homage to the Garda Síochána, the Irish National Police Force. The outer ring of the pin holds the first four initials of the band name while the blue inner ring lists only "Emerald Society Pipes & Drums" to show our unity and allegiance with all of the other Emerald Society pipe bands. The centerpiece of the hat pin displays a shamrock paying tribute to folklore that Saint Patrick used the shamrock to explain the concept of the Holy Trinity. 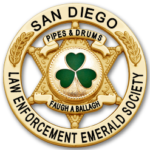 The Society badge is a gold six sided star within a circle. The centerpiece features a shamrock with the Irish phrase, "Faugh a Ballagh" on the lower rocker. This translates to "Clear the way" and was the motto of several units of Irish immigrant soldiers during the American Civil War, as well as units several other historic military units. References to this motto can also be found in modern culture.
Band members may also choose to wear the badge of their individual law enforcement agency, when authorized.

KILT HOSE
The standard hose (socks) worn by the band are dark green in color. The color green is of course a reference to Ireland being the "Emerald Isle", but the color was selected primarily to show a contrast to the predominantly blue color of the kilt tartan.

FLASHES
Flashes are worn with the hose (socks) to provide a colorful accent and to keep the hose in place. The standard flashes for the Band are made from the same Law Enforcement Officers Memorial Tartan as the uniform kilt.
Alternate colored flashes may be worn for different occasions. For instance, band members may wear red and green flashes for Christmas events, or black flashes for memorial ceremonies.

Special thanks to USAKilts.com for their support and assistance in outfitting the band.